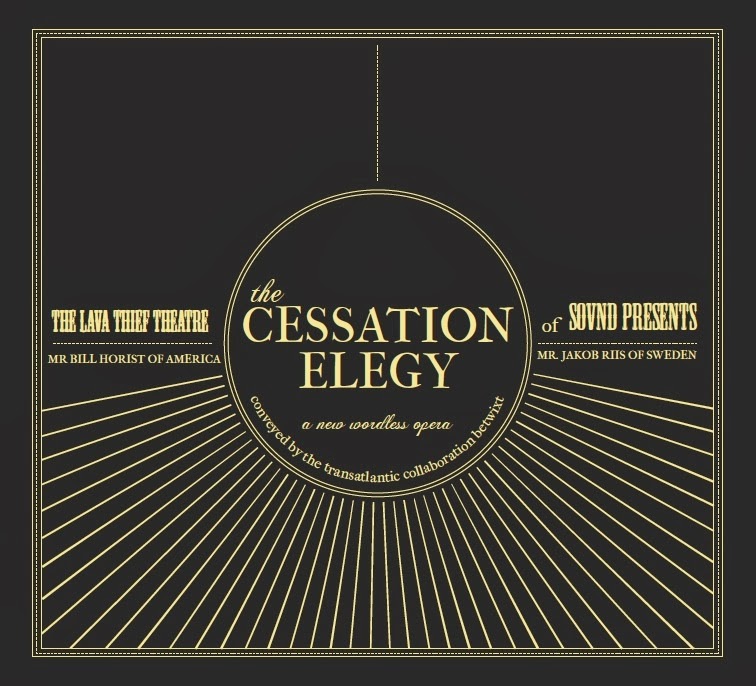 The Cessation Elegy
A collaboration between Bill Horist and Jakob Riis.

1. Wind, Tar to Baliene Flame
2. The Hidden Terms of Cessation's Elegy
3. Fibrillate - Wishes of the Last Twitch
4. A Rakish Gasp.
5. Who Mourns the Talus Dead?
6. Engines of Exposures Unborn;
7. A Certainty Drowned in the Channels of Memory.


Seattle based guitarist Bill Horist and Jakob Riis embarked together on a short tour of the Northwest US in the Summer of 2009.

Although they had known each other for years (having first met at a festival in San Diego and soon after, performed together in a larger ad hoc group in Tijuana, Mexico) they had never before worked together as a duo.

The plan was simple; each would do a solo set and then they would perform as a duo, wherein Jakob would process, manipulate and extrapolate Bill’s prepared guitar work.

It seemed like a good strategy, but neither expected such a synergistic result and ‘The Cessation Elegy’ is the culmination of this brief encounter. It explores broad sonic boundaries, finding footholds in a wide array of sounds - drone, raag-infused acoustic exploration, straight up noise, abstract folk, doom, electro-acoustic excursions and dolorous ambience.

Limited edition of 100 copies only on CD; the packaging is handmade, with gold ink screen printed onto black card.
Released on Lava Thief Records, april 7th 2014.


This is an extraordinary piece of work, a wordless communion in caustic colours and sterling guitar playing... An introspective vibe suddenly flung WIDE OPEN, as it grabs your attention in meaty dives of DOOM, tremors that tonally rot way in bouldering grains... - Michael Rodham-Heaps, Freq magazine

Warm guitar works alternate with manipulated tone works, and the result is a diverse album that plays to the strength of each… the beauty has been in the danger. – Richard Allen, A Closer Listen